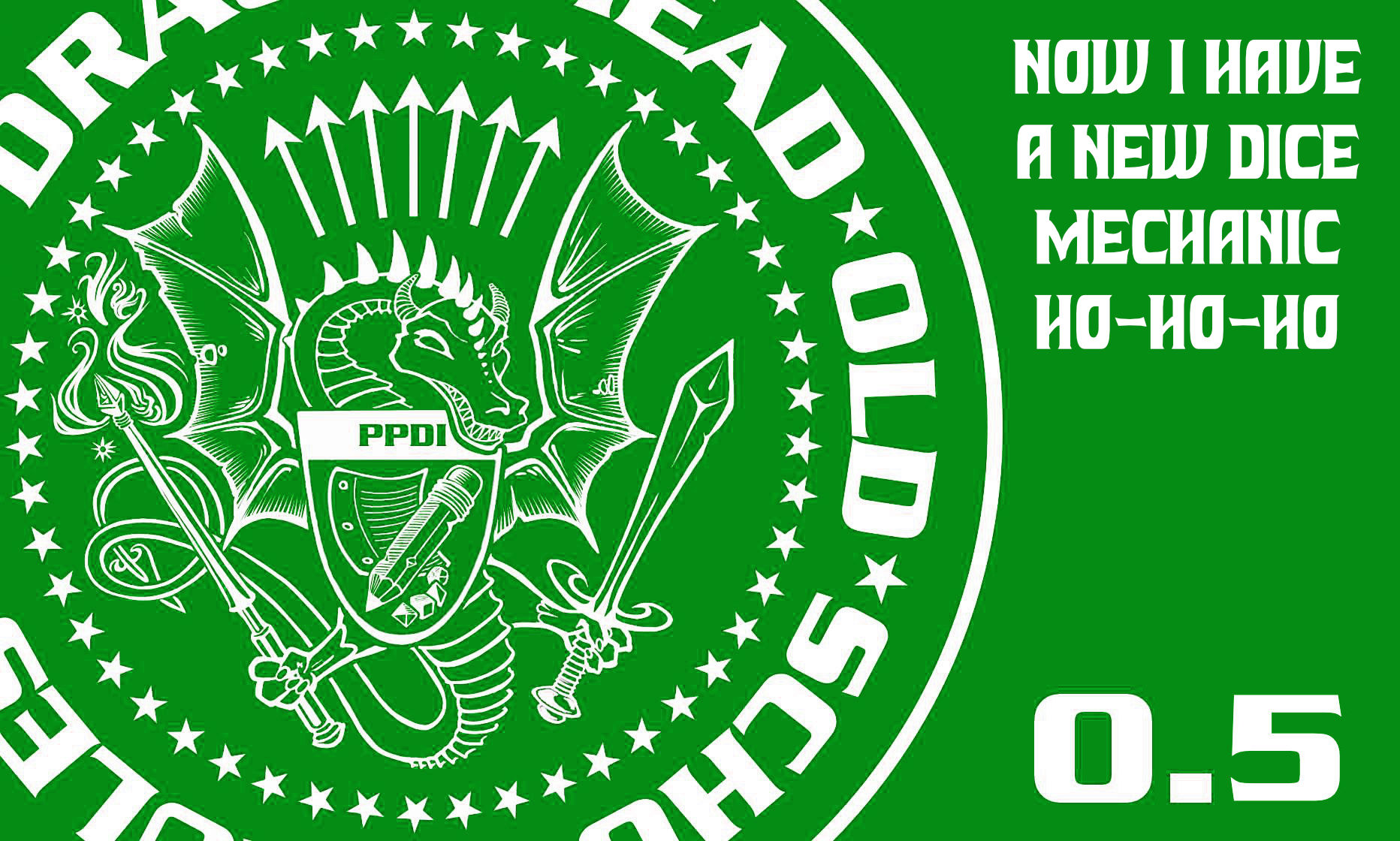 So. What happened to v0.4? Did you skip a number? No, it just did not make it this far.
As I said in the last Dragonhead update there is a reason for version numbers and v0.4 collapsed in on itself like a souffle at a pro-wrestling match. The problem was something I have bitched about for years, but sometimes I just don't listen to myself. It's the d20 roll. I want a system where you measure the performance of a character, where the numbers mean something and are not just there to tell you whether a character passed or failed. For that the d20 is too random.
I thought I had this fixed by introducing two other alternative rolls - the 3d6 and the 2d10 - and by increasing the chances of a crash to any natural roll of 1, 2 or 3. So you could roll the 1d20 but you were taking your life into your own hands with a 15% chance of crashing each time.
The problem is that 3d6 and 2d10 are unexciting rolls that yield lackluster results. The 1d20 crashes too often and yet it is the die that everyone is trained to gravitate towards, so the end feeling is not that the dice are crashing but the game itself is. Crashes can be a lot of fun, but not when they happen too often. That's when you start to wonder about the vehicle you are traveling in. 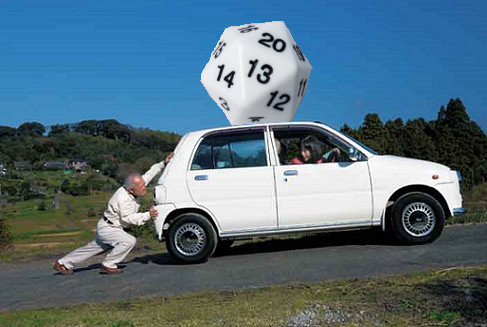 (Hey! This is Fun! Push Harder!)
For a while I didn't know what to do. I burrowed through my ever increasing pile of old ideas looking for an answer and came upon one which had some promise yet never seemed to work either: the Sign Die Risk Roll. Quite simply, with the SDRR there are no ability bonuses. It plays off of your ability scores. If a character has Dex 12 and you are called to make a check of it, you would roll a d20 and another die of your choosing. If the d20 rolls a 10 or less the other die rolls up a penalty while an 11 or better turns it into a bonus.
So if the d20 rolls a 12 and the d8 rolls a 7 you get a +7 and for that moment in time. Your Dex 12 is temporarily boosted to Dex 19. Against a 16 it would make the check. But if the d20 had rolled a 5 then you would suffer a -7 temporarily reducing you to Dex 5 and causing you to fail the check.
As a physical action the SDRR is the perfect die roll. It uses just two dice, meaning it makes a nice clatter in your hands before the roll and when the dice stop rolling you don't have to add up anything, you simply glance at them and know what you've got. If the d20 is showing a single digit number it's a penalty. With a double digit number it's a bonus. With the one exception of the number 10 which not much can be done about, short of creating a d20 covered in + and - signs. 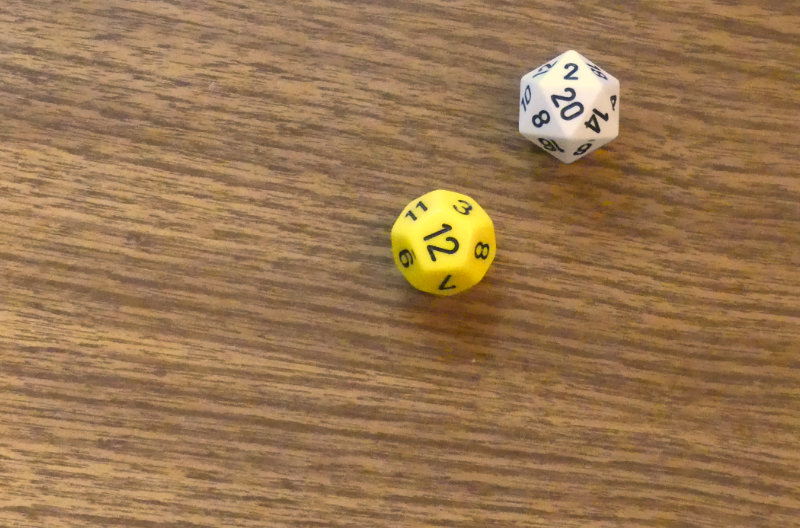 (You call this a problem?)
The problem with the SDRR has always been the other die. The try die. How can I complain about the 1d20 being too random when an SDRR roll of the d12 creates a 24 point range of possible numbers? I seriously wanted that second die to be any die a player desired. If you let your stat drop below 0 the action crashes, so there is some risk involved in choosing the d12 but just not enough.
And then something clicked.
For eons I have also been messing around with another subsystem called Try Hard 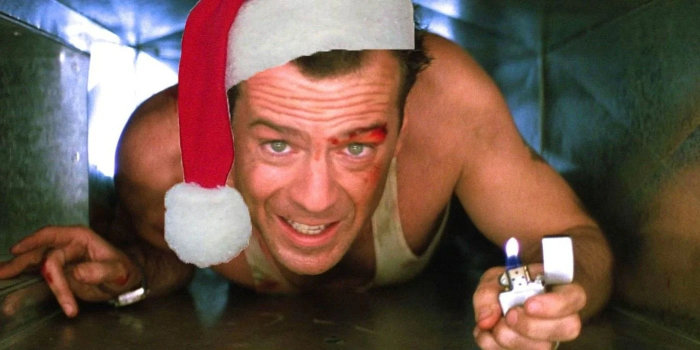 (Not coincidentally named after my favorite Christmas Movie)
With Try Hard you get a bonus for your check in exchange for a few hit points of wear damage. You tell the table you are trying hard, or harder, or your hardest to do what you are doing, mark down the damage and boom you do better.
What if? What if. What if. What if. What if.
What if instead of giving you a bonus, try hard determined the dice you rolled? That second die is called the Try Die after-all. And here is what I came up with. The basic risk roll uses a d20 and a d6, so there is only a 12 point spread of possibility. Try Hard and you take 1 wear and add 1 die to your roll. Try Harder exchanges 2 wear for 2 dice. Try Hardest trades 3 wear for 3 dice. These dice can be extra d20's to help avoid rolling penalties, or a step up the dice tree (d6, d8, d10, d12) to create a bigger bonus. In the end, you roll the dice and use the best numbers rolled.

John McClaine realizes he needs to flee the room but there is broken glass all over the floor and he's in his bare feet. The DM says he needs to make a Spirit check to beat an 18 to attempt it. John has Spirit 14. He decides to try his hardest and takes 3 wear of damage. This adds three dice to the base roll of d20 & d6. He chooses dice that add up to a roll of d20, d20, d6, d8, d10. They hit the table with a thunderous clatter and roll respectively 3, 16, 2, 5, 4. The best rolls are a 16 on the sign die and a 5 on a try die. It's a +5! Now with a Spirit 19 he beats the challenge although just barely and can flee the room.

Of course, to make this work I had to change pretty much everything since the old system was based on the idea of getting a +1 for every 2 points of ability score. I also had to get rid of Armor-based AC. Now AC is based on your ability to avoid being hit and armor reduces damage. And of course, a whole slew of other changes. You'll just have to go give the system a read to see them all.
Charisma In my last blog post I wrote about the decision to ditch Charisma. Which I did! For about three days. I couldn't bring myself to not notice its absence. Like a missing tooth in a smile, it becomes the only thing you notice. Besides, I never disliked Charisma. What I dislike is the way in which it is often used, but long before I wrote about ditching Charisma I wrote in the rules....

You don't actually use your abilities. You do things and your abilities are tested by them. You are literally checking to see if your character can do what you are trying to get that character to do.

Abilities are not there to be used. With this in mind there shouldn't be anyone saying, "I use my charisma to get past the guards." If you want to do that you need to actually come up with a scenario in which charisma could be used to do such a thing. Of course, people are going to play the way they're going to play. No amount of rules can stop that.
So Charisma remains and I don't think the game will suffer for it. Right now I'm just stoked about the new dice mechanic as well as the feeling that the foundation is solid. Finally, I can stop working on the system itself and start building stuff for it. In the meantime, Merry Christmas, Happy Holidays and I will see you next year!
Keys:
#agama #d&d #dragonhead #rpg #ttrpg